Justice beyond state, police and prisons: An introduction to Transformative Justice & Community Accountability.

How can we deal with conflict and violence in our communities without relying on the patriarchal institutions of the state, courts and police? How can we put our criticism of those institutions into practice? In the workshop, we want to discuss with you what we need to be able to react to interpersonal violence in anti-authoritarian communities and in the long run end (patriarchal) violence for good. We don’t offer a master plan, but room for interaction and debate. There will be an English spoken language whisper translation if needed.
// short version 3 hours, long version 5 hours

Anarchism?! What‘s that? – Lecture and discussion

What is anarchism? And (how) is it different than “anarchy”? We start with a brief introduction of anarchist principles and anarchism itself – a social movement for the liberation of all living beings in solidarity and autonomy.

We will then look at basic mechanisms of domination and how they work. What, for example, is the difference between governance, power and authority? Also, we will look at what ideals and ideas anarchists live and act by and talk about examples where these very principles are already being put into practice. Afterwards, we look forward to an exchange and discussion with you.

The lecture will be held in German, but whispered translation is possible. In the discussion, contributions in English are very welcome.

Smash patriarchy!? Feminist perspectives on violence in and against the patriarchy.

A three hour workshop about patriarchy, feminism and the roles of violence inside these. We’ll discuss different feminist perspectives, queer and trans* politics, anti-racism and critique of systemic and state oppression. We want to point out that (sexualized) violence is fundamental to the system of gender oppression.
Further on we want to talk about feminist strategies trying to tackle sexism and interpersonal violence in cooperation with the state and why this might by problematic, followed by a short overview on alternatives.
In the end: it’s possible and important to reclaim the discourses about violence beyond machoism to use them against this sexist system. Antisexism needs to become practical! We’re are looking forward to discussing what that might look like.

Sexuality_ies in the capitalist patriarchy

How, confronted with the alienation from our bodies and desires, society’s tabooing and shaming, as well as an endless commercialization and objectification of (women’s) bodies, degradation, boundary-crossing and assault, can we establish positive relationships to our bodies, desires and sexualities? Even within the feminist movement(s), there are prominent arguments made against pornography, sex work and certain sexual practices. The workshop “Sexualities in the Capitalist Patriarchy” begins with an outline of problems concerning the social conditions of desire, intimacy and sexuality. Together, we will discuss ways of discovering and communicating one’s own needs and tools such as consensus principles, alternative relationship models and queer sexualities, in the search of revolutionary and subversive approaches to sexualities.

This workshop can be combined with the workshop “Sexualities in Capitalist Patriarchy” (3-5hours depending on your wishes).

In order to protect our structures and fend off repression and surveillance by the state, corporations, fascists and others, the concept of Security Culture was developed. It is not only about encrypting devices and emails, but about recognizing security as a holistic concept that considers social and physical aspects in addition to digital security. Security is much more than encryption and cannot simply be bought, no matter what vendors promise you. Therefore, this workshop is not a crypto party, but a political analysis of surveillance and repression and their goals. The workshop then introduces the idea of Security Culture and offers practical tips and concrete examples of how you can defend yourself against repression. From risk analysis to spy cops to encryption, the workshop will give you an insight into the dangers of repression and the possibilities to defend yourself.

A short introduction to the critique of penalty

Penal logic is deeply interwoven into our society. It has become an essential part of the justice and prison system and just as well our education and relationships.
In our workshop we will be looking at our understandings of justice and penalty. Following this we’ll present a short introduction into the history and logic of the ideas behind penalty.
Together with you we want to see where in our daily lives penalty can be found, why it is so deeply ingrained in our society and so heavily romanticized. We want to question the logic of penalty including the penal system of the state and its role in oppressive systems.
We see penalty as systematic harm in the name of ‘justice’ and as a central cause of violence and systemic oppression.
We want a world without domination. That includes a world without penalty. We want communities freeing themselves of coercion, obedience and oppression and are looking for alternative ways to organize and live together.
Let’s explore together, how to get there.
// approx. 2 hours

The goal of the prison system is to isolate people from their social environment. In prison, a small piece of the outside world like a letter can help a lot. There is a lot of uncertainty about writing letters to prison, so we want to clarify the most common questions in a short input. We also bring materials needed for writing letters as well as current addresses of prisoners.
Until all prisons are smashed: Write letters!

Let’s talk about gender, baby! A short introduction to feminism, gender and antisexism.

We start the workshop with a short introduction to the basics of feminist theories and history. Our aim is not to read out a long list of names and dates, but to create a basis to think about gender hierarchies in this society, in the left scene and our relationships. We will roughly outline different feminist currents and introduce intersectionality as a broader discrimination-sensitive analysis. Beyond theory, we are also concerned with very practical questions such as: Who has resources and contacts? How do we distribute roles in our groups? Who makes first line in a demonstration? Who builds infrastructure? Who takes care of others? Who does the dishes? Who speaks to the outside world? Whose bodies are the subject of discussion?
We want to discuss these and other questions with you and talk about how we can transform these power dynamics through anti-sexist practices.

No prior knowledge is needed. We will try to use generally understandable words in the workshop or, if necessary, explain technical and scene terms. If you need a translation into another language, please let us know in advance. An English whisper translation will be available if needed.
// approx. 2 – 3 hours

Lock up, manage, deter – how prisons work and utopias beyond them

Prisons are a central institution of the justice system, they not only affect those incarcerated but all of us. The threat of being locked up makes us think twice before we take what we need to live, before we break the rules of power. Prisons are one of the most brutal manifestations of the repressive powers of state and capitalism. They protect property, exploitation and oppression.
Thus it makes sense that most of those incarcerated are in for property related “crimes”. For allegedly stealing or riding a bus without a ticket. More than one third of the German prison population is locked up for not being able to pay a fee – they are being punished for being poor.
Meanwhile an industry around prisons is making lots of money by overpriced services like phone calls in prison or forced labor for nearly no wage at all. Society is telling us this system is necessary and for the best of all of us, necessary to prevent chaos. But is that really true?
Even the justice ministry itself admits in a study that prison sentences actually increases the chance to commit a violent “crime” again. It doesn’t really come as a a surprise that such a violent system produces more violence instead of stopping it. So why is prison, such a failing and violent institution, deemed necessary?
Let’s discuss this together. Why are there prisons? What’s their purpose? How are social conditioning, state power preservation and the idea of locking folks up connected? What do our utopias of a liberated society look like?
// approx. 2 – 3 hours

Critique of the police

As a result of the murder of several People of Color by police in the USA in early 2020, racist police violence and demands for reform or dismantling of the police have moved into the focus of political and media debate worldwide. It demonstrated once more that for many – People of Color, queers, drug users, sex workers, people without a permanent residence or legal residence permit, people criminalized or traumatized by police – the police are not a “friend and helper”, but a source of systematic discrimination and violence. We therefore want to take a look at the origins and ideology of the police, show different perspectives on criticism of the police – historical and anti-racist, anti-patriarchal, ideological, anti-militarist… – and ask ourselves more broadly what “violence” and “security” mean to us. 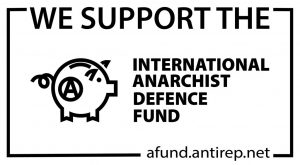